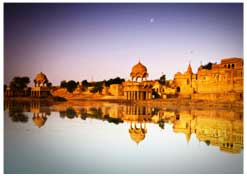 Day 01 : Arrival at Jaipur
Arrival at Jaipur - Meeting and assistance on arrival at airport / railway station and transfer to hotel. Overnight at hotel.
Day 02 : Jaipur
Morning excursion to Amber fort. Make your ascent to the palace fortress on the gaily-caparisoned elephant back (optional). Tour the chamber & hallways of the palace, which are famous for the excellence of their design & decoration. Afternoon tour of Jaipur known as " The pink city of Rajasthan "visit the unique Janter Manter observatory, which was built in 1700's, yet even today still looks futuristic or almost surrealistic: the city palace & its museum, the Hawa Mahal or the palace of winds. Overnight at hotel.
Day 03 : Jaipur -Ajmer/Pushkar
Morning drive to Ajmer. On arrival visit the Ajmer city -The Dargah, the Dargah is the tomb of Sufi saint, Khwaja Muin-uddin Chisti, who came to Ajmer from Persia in 1192. Construction of the shrin was completed by Humayun. Constructed of white marble, it has 11 arches and a Persian inscription running the full length of the building. It has a marble dome and the actual tomb inside is surrounded by a silver platform. The tomb attracts hundreds of thousands of pilgrims every year on the anniversary of the saint's death Adhai-din-ka Jhonpara one of the finest example of Indo-Islamic architecture, this mosque was a Sanskrit college in the 12th century. In 1193 AD Mohammad Ghori destroyed the college and a mosque was built in its place. The mosque was built on pillars and surprisingly no two pillars are alike.
After the tour of Ajmer drive to Pushkar. The sister city of Ajmer, Pushkar is just 11 km away from the city. The road to Pushkar passes through the Nag Pahar or the sanke mountain. Pushkar is an ancient city. The city is considered by Hindus to be one of the most sacred places in India and has, perhaps, the only existing temple in Asia, dedicated to Lord Brahma. Life in the city is very much related to the Pushkar Lake. Mythology says that this ancient lake was formed when a lotus slower fell in the valley from the hands of Brahma.
The famous Pushkar fair is held every year on the Kartik Purnima day. This fair is famous as a bazaar for the animals particularly the camels. But the folk dancers and the folk musicians add traditional colour in the fair, which gives a new leash of life to the town.
Day 04 : Pushkar – Jodhpur
In morning visit the temples and holy lake. Leave for Jodhpur. Arrive by noon and check in at hotel Afternoon, visiting Mandore gardens set on a plateau are the ruins of the ancient marwar capital now surrounded with beautiful gardens. See the pillared hall of heroes' and the shrin of the 300 million gods' return to the old city walk through sojati gate, which leads to sadar bazaar with its ornate clock tower. Overnight at hotel.

Day 05 : Jodhpur –Jaisalmer
Morning, sightseeing tour of Jodhpur -Gateway to the desert beyond, home of the Rathores of marwar. Visit the fort, rising up a hilly scrap, built on the advice of a hermit which over looks the city in, the image of a long sentinel. Inside the fort are a number of palaces added by successive ruler. Also visits the jaswanthada, richly carved white marble cenotaph of Maharaja Jaswant Singh ii, which preserves the genealogy of the rulers of Jodhpur along with their life-size portraits. Afternoon depart for Jaisalmer. On arrival check in at your hotel.

Day 06 : Jaisalmer
Morning, sightseeing tour of Jaislmer. It is in the heart of Great Indian Desert. Visit fort, built by Maharawal Jaisel in 1156 ad -one of the 2nd oldest in Rajasthan situated on triangular mount 76 meters above ground level, Jain temple of 12 century BC, Gadsisar tank, folk museum, Patva-ki-haveli, Salim Singh haveli and Diwan Nathmal ki haveli, Badal Niwas palace-return to hotel through narrow cobbled streets. Afternoon drive to Sam located 45 km west of Jaisalmer to have the feel of Thar Desert and sand dunes. Camel ride (optional) on these dunes is a lifetime experience. Return back to Jaisalmer for overnight at hotel.

Day 08 : Bikaner
Morning -Sightseeing of the city of Rao Bikaji, a descendant of the founder of Jodhpur Jodhaji, founded this desert town in the north of the state in 1488. Visit the Junagarh fort constructed between 1571 & 1611 by Raja Rai Singh, the 6th Rular of Bikaner. Also visit Lalgarh Palace museum & camel breeding farm (closed on Sunday). Over night at hotel.

Day 09 : Bikaner
Jaipur After breakfast leave back for Jaipur and arrive by afternoon where your tour ends. Departure for onward destination by train/air.