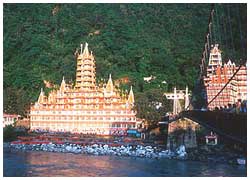 Day 01 : Arrival in Delhi
You will be received on your arrival at Delhi by Arv Holidays representative. You are going to embark on an amazing Golden Triangle Rishikesh. He will transfer you to a hotel. Have dinner at the hotel and retire for the night.
Day 02 : Delhi Sightseeing

After taking your breakfast, you will embark on sightseeing tour of Delhi. Delhi has a checkered history, but stormy, however. Has been declining, invasion, destruction and rebirth. However, the city continued to shape the Indian culture and destiny. In exploring the monuments of Delhi, which could also get a glimpse of the history of Delhi. You will start to visit the monuments of Old Delhi. Red Fort is the most important tourist attraction there. It's gigantic structure in red stone. Then go to Jama Masjid. It is the largest mosque in India. Both are built by Emperor Shah Jahan. Exploring the market Chandani Chowk, you will feel the medieval aura everywhere. Visit Raj Ghat to pay his respects to the father of the nation. Lunch at a chicken restaurant. After lunch, visit places of interest in New Delhi as India Gate, Rashtrapati Bhawan, Qutub Minar and Parliament. Delhi has a majestic temples like the Lotus Temple and Birla Temple. Go back to your hotel. Have your dinner and retire for the night.
Day 03 : Delhi - Rishikesh - Haridwar (230KM - 5 hours)

After taking his early breakfast you will drive to Rishikesh passes through Haridwar. After arriving in Rishikesh, which is recorded in a hotel. Later, visit attractions like Rishikesh Laxman Jhoola, Pushkar Temple, Shatrughan Temple, Muni-ki-Reti, Swarg Ashram, Triveni Ghat, etc. Later visit Haridwar and its various attractions such as the Hari-Ki-Paudi. According to myth, a drop of nectar (Amrit) fell here, which means the beginning of the world. It's a magic show in which thousands of lamps are lit at the same time in all the temples of Haridwar for the night Arti. An indescribable ethereal sight to behold! Then, in view of countless lamps and flowers floating in the river Ganges is very surreal. It is certain that Golden Triangle Tour with Rishikesh will make you feel rejuvenated. After returning to his hotel. Have your dinner and retire for the night.
Day 04 : Rishikesh - Agra ( 300kms, 5-6hours )

After having your breakfast early in the morning, you will embark on a half day sightseeing tour of Rishikesh. Explore famous attractions like Bharat Temple, Rishi Kund, Gita Bhawan, Parmarth Niketan, Laxman Temple, etc. After having your lunch, proceed to Agra. After arriving there, you will check into a hotel and relax. Later, Visit the local markets of Agra to buy souvenirs, curios and ethnic artifacts. Go over to Oswal Emporium where they have installed a replica of Taj Mahal which took 10 years to complete. Watch the sound and light show depicting the various periods of Taj Mahal. Get back to your hotel.
Day 05 : Agra Sightseeing

After taking breakfast, we head to Swai Madhopur, where our representative will transfer to a jungle lodge pre-booking. It will cool down in the hotel. Enjoy your leisure time in the hotel. You will have dinner at the hotel and retire for the night.
Day 06 : Agra - Jaipur (230kms - 5hours)
After taking your breakfast, to drive to Jaipur. You will visit Fatehpur Sikri on the way. In Fatehpur Sikri, visit Panch Mahal Darwaza Bulund and Sanctuary of Sheikh Salim Chisti. Then resume your journey to Jaipur. Upon arrival at Jaipur, which is recorded in a hotel. Relax for a while. Then visit the Birla temple at night. This is a beautiful temple built in marble. Have your dinner at the hotel 5 stars ethnic, Choki Dhani. To return to your hotel and retire for the night.
Day 07 : Jaipur

After taking breakfast, we visit the attractions of the city. Visit the City Palace and museum complex. There are many museums that show the heritage of Rajasthan. Hawa Mahal is another beautiful building that was built for the royal women to watch the outside world. Visit Jal Mahal will be fun as it is situated on the banks of a lake. A camel ride around the lake is very exciting. Explore the Amber Fort situated on a hill. It is the largest fort in India. Enjoy a magnificent elephant ride to the fort. Visit Jantar Mantar, Rambagh Palace and Nahargarh Palace. Visit local markets to buy souvenirs, indigenous crafts, etc. Then return to your hotel. Dinner and retire for the night.
Day 08 : Jaipur - Delhi ( 260Kms - 5hours )

After taking breakfast, we drive back to Delhi. If you have time, visit Nimrana on the road to Delhi. Arriving in Delhi, will be transferred to International airport to board your flight home. Here, the Golden Triangle wonderful journey ends.