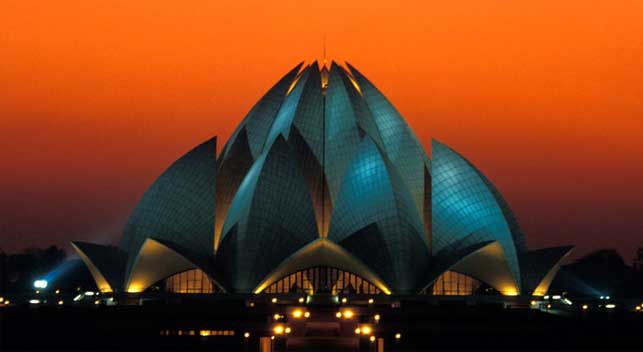 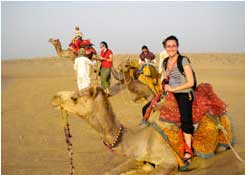 Situated in the state of Rajasthan, India, this historical city is the popular tourist destination, which is famous all over the world for having the magnificent Mehrangarh Fort and Jaswant Thada. With seven gates, Mehrangarh Fort, which is one of the largest forts in India, has a museum inside it, which is one of the most well-stocked museums in the state of Rajasthan. The Jaswant Thada Mausoleum, which is a white marble memorial constructed by Maharaja Sardar Singh of Jodhpur State in 1899 in memory of his father named Maharaja Jaswant Singh II, is an architectural landmark.

The city of Jaisalmer is home to forts and palaces. The major attraction of the city is Jaisalmer Fort, which is a magnificent piece of architectural grandeur. Because of having its different reflections in golden color at different times, this fort is also called Sonar Quila or Golden Fort. A number of beautiful Havelis, which are exquisitely decorated and embellished, are must visit attractions of this city. 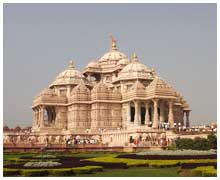 On arrival in India, which will be received by the Arv Holidays representative at the airport. You will embark on a fascinating Rajasthan Camel Safari. Then you will be transferred to a hotel. After relaxing for a while in the hotel, which is established for a tour of New Delhi. There are many attractions to visit in Old and New Delhi. We begin with a visit to the attractions of New Delhi as India Gate, Rashtrapati Bhawan, the National Museum, Lotus Temple, Qutub Minar, Humayun's Tomb, etc. Then visit the ancient sites of interest such as Red Fort in Delhi, Jama Masjid and market the heritage of Chandani Chowk. You can also visit the local markets of Delhi for the purchase of souvenirs, curios, objects, etc. Return to hotel. Dinner and retire for the night. 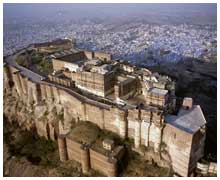 In the morning, have breakfast. Thereafter, board the flight to Jodhpur. After arriving at the hotel, which is recorded in a hotel. Cool off and relax for some time in the hotel. Next, state the sightseeing tour of Jodhpur. This city is a popular tourist destination. The city has many palaces and forts. You get to see the magnificent Mehrangarh Fort and Jaswant Thada. Dinner and overnight at the hotel. 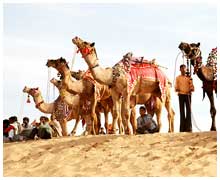 After their breakfast, proceed to Bikaner. After arriving there, they check into a hotel. The city was founded in 1488 by Rao Bhikaji. Located at the north end of the three cities triangular. Bikaner is famous for three things, namely, its magnificent fort, temples and Camel Safari Tours. He's going to take a brief tour of Bikaner markets. Dinner and overnight at the hotel. 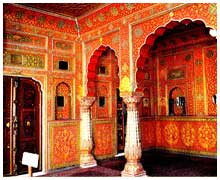 This will be an exciting day. Take your breakfast and leave for the tour of Bikaner. Junagarh is the most famous attraction of the city. Inside the fortress, see Diwan-i-Khas, Phool Mahal (palace), Badal Mahal (palace) and Anup Mahal (palace). In the afternoon, go to where the camel safari begins. The night was spent in the safari camp. 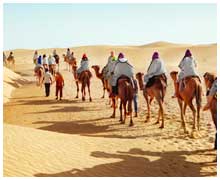 Now, the fascinating Rajasthan Camel Safari Tour begins. You will embark on a camel safari for three days (days 5, 6 and 7). This tour takes you to Jaisalmer, enroute visiting many places. The main attractions of the safari would be cultural performances, bonfires and delicious Rajasthani food. 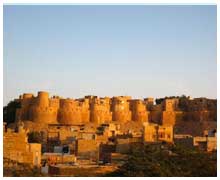 Upon arrival at Jaisalmer, you will be staying in a hotel. In this case, the fascinating Rajasthan Camel Safari Tour ends. The city of Jaisalmer has forts and palaces. The exotic flavor of the place really cast a spell on you. Take a small tour of the places near your hotel. To return to your hotel. Dinner and retire for the day.

In the morning, have breakfast and leave for sightseeing tour of Jaisalmer. You will visit the city attractions. The main attraction of the city of Jaisalmer Fort. It is magnificent piece of architectural grandeur is impressive. Then, visit several beautiful havelis. All are exquisitely decorated and embellished. You will enjoy the real beauty of these havelis. Dinner and overnight at the hotel.

After having breakfast, going to Jodhpur to board the connecting flight to Delhi. After arriving in Delhi you will be transferred to a hotel. Dinner and accommodation will be on site.

After taking your breakfast, you will be taken to the airport to board a flight for your onward trip. The fascinating Rajasthan Camel Safari is over, but the great memories will last for long.

Note : The amount can also be paid by Credit Card. Each Credit Card payment will attract the surcharges @ 3%.