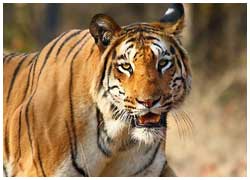 Day 01 : New Delhi-Kanha National Park
Upon arrival at Delhi airport met our representative and will transfer to the domestic airport where you board your flight to Jabalpur airport. Then drive to the wildlife station located near the Kanha National Park. Complete rest until evening. Overnight.
Day 02, 03 & 04 : Kanha National Park 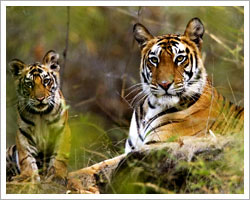 The Jungle Book by Rudyard Kipling has been influenced by the natural environment and beauty of Kanha. In 1974, Kanha Tiger Reserve came into existence under the Project Tiger launched by Government of India. Besides tiger, the main attraction of this park is the swamp deer Hardground rare (Barasingha), which is on the verge of extinction. Kanha is also home to a variety of bird species and several other species of flora and fauna. You will stay at Jungle Lodge for four nights. Morning and afternoon embark on your safari in the park. Camping in the field of vision to see the special tiger tiger in Kanha. Also go on a birding tour.
Day 05 : Kanha - Bandhavgarh National Park (5 hours drive)
In the 5 th day of India wildlife tour with Tiger Safari, drive to Bandhavgarh National Park. It is five hours drive from Kanha. On arrival take the jungle resort. At night, walk past the picturesque surroundings of the lodge. Enjoy a stay at the jungle resort located in a robust environment.
Day 06, 07 & 08 : Bandhavgarh National Park 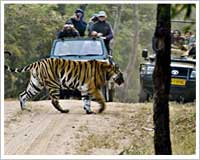 Bandhavgarh National Park derives its name from an ancient fort. It was once a hunting reserve of the Maharajas of Rewa and got national park status in 1968. This park is located in the Vindhya Range of central India and known for its highest density of tiger population in the country. The forests of this park is known for its white tigers, and there were no reports of white tiger at the park. An elephant safari, we recommend the best way to explore Bandhavgarh Nationasl Park and its flora and fauna. Besides seeing the tiger, you will see here the Nilgai, Chausingha. Chital, Chinakara, boar and fox. Each day we would embark on a safari for tiger tracking, bird watching. A naturalist will guide you to the place of tigers in the best locations.
Day 09 : Bandhavgarh National Park-Delhi
Until the afternoon spend time at the lodge in the jungle. You can see a movie or chat wildlife with a naturalist. In the unity of the scheduled Katni to catch the train to Delhi AC. Overnight on board
Day 10 : Delhi - Corbett National Park 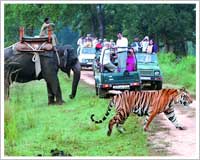 On arrival at Delhi railway station early in the morning, our travel rep wildlife will receive and lead to Corbet National Park located in the Indian state of Uttaranchal. Check into a field of Tigre. Corbett National Park, a favorite haunt for tourists of wildlife is named after the hunter turned conservationist Jim Corbett. Although it offers good tourist infrastructure, which has a primitive environment enhanced by the deep forests, rivers and rugged landscapes of nature. Corbett is the first national park in India. The forest area of the park is part of the western Himalayan foothills in the districts of Nainital and Pauri Garhwal and. Ramaganga river flows from east to west through the park. The main wild animals found in the park are tigers, elephants, sloths, crocodiles, Himalayan black bear, dhole, jackal, yellow throat marten, Himalayan palm civet, gray mongoose of India, the common otter, the hog spin Naped black hare.
Day 11 : Corbett National Park

After breakfast, departure to Dhangarhi gateway to Dhikala tourism zone. Start your safari by jeep to the jungle track down. Safari Ramaganga along the river. Enter the range of Kanda, where Jim Corbett shot the famous Kanda man-eater. After observing wildlife for three hours to reach the Dhikala complex. Explore the tranquil beauty of nature. And then lunch. In the afternoon embark on an elephant ride for monitoring tiger. A naturalist will guide you. You will notice that tigers in Corbett. At night, watch wildlife film.
Day 12 : Corbett National Park
Early morning go on a jeep safari to see tigers. After breakfast, visit the area of the lake to see crocodiles. You can see Gharial, the famous fish eating crocodile.
Day 13 : Corbett National Park-Delhi