Places to Visit in Varanasi and Sarnath 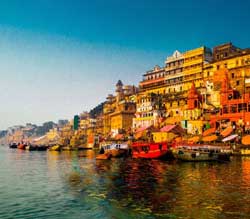 Also called ‘Banaras’, ‘Benaras’, or ‘Kashi’, and located on the banks of the Ganga River, the Varanasi City, which has the administrative headquarters of the Varanasi district and division of the northern Indian state of Uttar Pradesh, is referred to as the ‘Spiritual Capital of India’. Famous as an ancient living city in the world, this place, which is the most scared of the seven holy cities (Sapta Puri) in Hinduism, has also played a significant role in the growth of the Buddhism and Jainism. Having been a cultural center of North India for thousands of years, this holy city, which is strongly attached with the holy river Ganges, is counted among the most visited pilgrim destinations in India. All the year round, thousands and thousands of pilgrims from every nook and corner of India as well as the world throng this destination. This city is also called the ‘City of Lord Shiva’.

Places to See in Varanasi

The Varanasi City has a plethora of tourist attractions. Here is the list of the main ones of them. 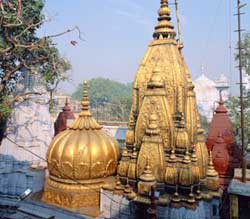 This holy city is said to house approx 2,300 temples. The very famous temples for worship include the Kashi Vishwanath Temple of Shiva, the Sankat Mochan Hanuman Temple, and the Durga Temple, popular for monkeys that dwell in the adjacent large trees. The Kashi Vishwanath Temple, which is one of the 12 Jyotirlinga shrines in India, is also called the ‘Golden Temple’.

Dedicated to the Lord Shiva, the Nepali Mandir, which is also called the ‘Kathwala Mandir’, or the ‘Mini Khajuraho’, is one of the most ancient and most famous temples in the sacred city of Varanasi. Being a replica of the Pashupatinath Temple in Kathmandu, the national capital city of Nepal, this temple is built of terracotta, wood and stone in the Nepali style of Pagoda architecture. As this temple owns sculptures with the similarity of ones showed in the Khajuraho Group of Monuments, it is also referred to as the Mini Khajuraho. 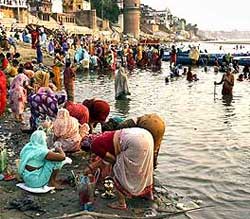 The Ghats in Varanasi, which are world famous embankments built in steps of stone slabs along the banks of the river Ganges, are counted among the most visited tourist attractions in this destination. The very renowned Ghats in this holy city include the Dashashwamedh Ghat, the Manikarnika Ghat, the Assi Ghat, the Panchganga Ghat, and the Jain Ghat. Here, you can get the chance of taking the enjoyment of a boat ride on the river early in the morning, and watch a lot of people come to dive in the river and worship the rising sun. On the Manikarnika Ghat, you can attend the evening Ganga Aarti, held by the priests of the Kashi Vishwanath Temple. 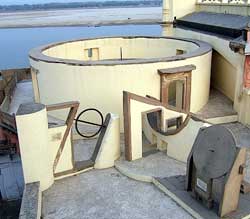 Erected in 1737 A.D. close to the palace of Maharaja Sawai Jai Singh, the Jantar Mantar observatory, which is adjoined to the Dasaswamedh and Man Mandir Ghats, is situated above the Ghats along the sacred Ganges river. In spite of having the equipments fewer than those of the observatories in Delhi and Jaipur, this observatory owns a matchless equatorial sundial. Being functional, this sundial allows measurements to be recorded and measured by a person.

Constructed of cream colored Chunar sandstone in the 18th century by Kashi Naresh Raja Balwant Singh, the Ramnagar Fort, which is situated close to the sacred river Ganges on the eastern bank of this river and opposite the Tulsi Ghat, is a typical example of the style of the Mughal architecture. This fort has open courtyards, carved balconies, and picturesque pavilions. Within the complex of this fort, you can also visit the Maharaja Banaras Vidya Mandir Trust Museum. This museum has the collection of textiles, the old Palkis, pieces of decorative arts, manuscripts and furniture.

Apart from these, Varanasi is home to several other attractions such as the St. Mary’s Church, the Banaras Hindu University, the Bharat Kala Museum, the Nandeshwar Kothi, and so on. 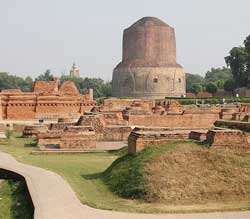 At a distance of approx 13 km northeast of the Varanasi city close to the confluence of the Gomti and Ganges rivers, you can visit the Sarnath city, located in the Varanasi district. In the Deer Park of this city, Lord Buddha preached his 1st sermon after getting himself enlightened in Bodhgaya. This spot has a Stupa built by Ashoka the Great. Here, you can visit many other Buddhist monuments, erected after the construction of the Stupa. These Buddhist monuments are the major tourist attractions of this place. In the crumbling Viharas and Stupas, you can find several manuscripts, remains and inscriptions. This spot also has the importance of the Jainism.

Places to See in Sarnath

Having its impressive height of 128 ft and the diameter of 93 ft, the Dhamek Stupa, which is constructed of a blend of stone and brick, is the most famous tourist attraction in Sarnath. This structure has the adornment of the intricate carvings of flowers related to the Gupta origin.

The Chaukhandi Stupa is the Stupa at Sarnath, which was originally constructed by Ashoka the Great after he adopted the Buddhism.

Erected in 1930 A.D. by the Mahabodhi Society of Sri Lanka, the Modern Mulagandha Kuti Vihar, which has its walls painted charmingly, is a beautiful monastery at Sarnath. Behind this monastery, you can view the Deer Park, with deer still to be visited.

Here, you can visit the Sarnath Archaeological Museum. This museum showcases a plethora of images and relics of Buddha and Bodhisattva. All these specimens were found after the excavations made at Sarnath. In this museum, you can also explore the ‘Lion Capital of the Ashokan Pillar’, the emblem of the Republic of India at present.